How Does Underwater Welding Work? A Shocking Process Few Know

Under most circumstances, we see this mixture as a bad idea.

When electricity is generated within a fluid, it reacts unpredictably.

And unlike insulated solids (think copper wire), there’s no specific path generated for the electricity to move through.

In water, electricity the point of least resistance and go on its merry way.

It shows no bias toward humans.

A Closer Look at the Underwater Welding Process: Dangerous or Safe?

So how does underwater welding work in a professional setting?

Can welder-divers perform welding in a safe manner?

Or is it safe at all?

Let’s look at the underwater welding process from a scientific perspective.

As I’ve explained before, divers use underwater welding in two forms: dry and wet. We’re going to examine both types so you can learn the process.

Fans & Pressure: Welding Inside of a Hyperbaric Chamber

Dry, or hyperbaric welding, is applied in several ways through different types of enclosures called “habitats“.

The habitats have an identical or small bump in pressure to the surface level. This slight increase the pressure provides a continuous volume air within the chamber for welder-divers to work in. Operators of the habitat unit set the pressure at just .007 pounds per square inch above the atmospheric pressure outside.

The larger habitats can fit two or three people inside.

Similar to a surface supplied diver, the surface team constantly pumps air into the habitat from the ceiling or sidewalls. Simultaneously, the habitat pulls air out through fans and pipes at the base of the unit.

New air in, old air out.

The continuous fluctuation of air keeps the habitat from building up toxic fumes. If gases were to build up inside, hyperbaric welders could suffocate. And at greater pressures, dive teams may use helium mixtures for purposes or pressurizing.

Dive teams may use helium to pressurize the cabin so that underwater welders don’t get nitrogen narcosis, or worse, lose consciousness. Helium is also lighter than many other gases.

Trapped Air Can Endanger Your Life

Also, concerning the possibility of explosions:

Gas explosions are not an issue isolated to underwater welding.

Surface welders must prepare for the possibility as well.

Even in a basic welding shop, welder who practice safe technique should set up proper ventilation to keep air moving through. This keeps any excess material and gases from collecting.

Where Habitats Make an Appearance

Because of the significant cost, larger habitats are used primarily in major projects beneath oil rigs and large vessels. But underwater welders also use smaller enclosures.

Some fit over the upper body.

Others only enclose the electrode itself; they look like a small bubble (spot welds).

Due to the simplicity of the design, these habitats are less cost prohibitive.

For example, the spot weld habitats only require the water to be displaced with air. They don’t need a breathable environment for welder-divers, since everything is self-contained over the electrode.

Underwater dry welding may theoretically use any welding type that surface welders use.

The welder works completely surrounded by water – including their electrode.

Under the Microscope: How Electrons Affect the Process

How does underwater welding work up close?

First, you should understand what’s happening with the electrode at the molecular level.

The heat distribution of the electrode to the weld area is extremely important, and it’s controlled through charged electrons.

There are three primary areas of heat movement:

The cathode is negatively charged, and the anode is positively charged. Therefore, when the underwater welder strikes an arc, the electrons from the cathode travel down toward opposite polarity (the anode). At the same time, positive ions are moving up toward the cathode.

Diagram from “A Welder’s Mate” by David Keats

This massive particle movement generates an enormous amount of energy and heat. The arc heats up plenty: Over 5,000 °C.

But the heat is not evenly spread through the work area. About 66% of it goes to the anode. The other portion remains at the tip of the cathode.

How does Underwater Welding Work Under the Hood: Equipment, System & Circuit Process Explained

The underwater wet welding cable system and power source are a little different from underwater dry welding (and surface welding).

Underwater wet welding insulates its electric cables twice. It only uses direct current for its power source (as opposed to alternating current) and most commonly incorporates negative polarity.

The system also adds a knife switch along the cables.

Their knife switch keeps the power turned off to their welding stinger. 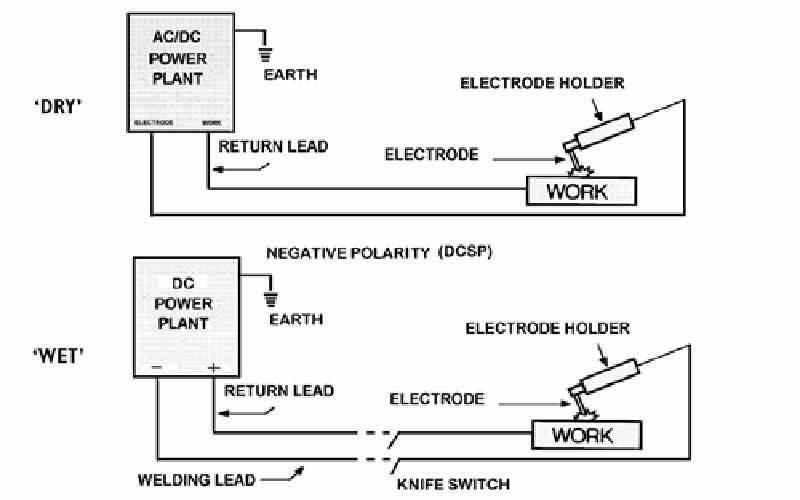 Diagram from “A Welder’s Mate” by David Keats

After they’ve properly position themselves for their weld, the welder-divers communicate to the surface team (make it hot).

They strike their electric arc, which flows from the waterproof electrode to the metal seam.

Force Field Against the Elements: The Importance of Bubbles in Welding

All wet welds are protected by a gaseous bubble that forms around the arc. This bubble is most often composed of a specific mixture of gases:

The waterproof electrodes have a thick material called “flux” on their outsides. As the electrode burns, this chemical change produces the gas bubble around the weld.

This bubble is only formed in the immediate vicinity of the weld.

As the welder-diver moves along the seam, he or she leaves behind metal liquid called slag; it covers the top of the seam so that the weld has time to cool properly.

When SMAW surface welders perform a welding project, they occasionally drop this slag in places they don’t want it.

Underwater, this problem may be amplified, due to limited visibility and temperature fluctuations.

Therefore, the makers of waterproof electrodes created a more resistant flux. This allows for the slag to drip more evenly. It also gives a consistent burn on the electrode so underwater welders have more control.

There’s one more thing you should know:

Underwater wet welders face a unique challenge. Their welds produce additional bubbles that go straight up into the surrounding water.

It’s the same effect you get when diving under and exhaling.

But on a wet weld, it hinders visibility and moves the weld puddle more rapidly. On top of everything else, the electric arc is effected by these bubbles and faces the risk of collapsing.

But experienced underwater wet welders are used to the underwater welding process, and they handle it with more ease.

What is Spot Welding? Understanding it Thoroughly