In the early 20th century, it would have been considered suicide for a diver to shoot an electric arc into the water. Though professional diving was already an established industry (and had been for hundreds of years), underwater welding was not. That all changed when Konstantin Khrenov, a Soviet engineer, invented a method to join and cut metals underwater. 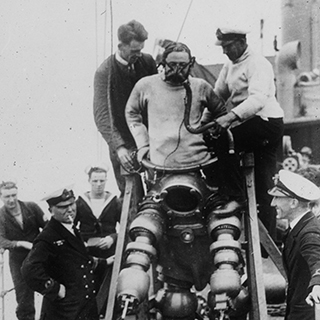 In 1894, Khrenov was born in Borovsk, a town on the clear west side of Russia. Incidentally, this town is also the home of another great mind – Konstantin Tsiolkovsky, a rocket scientist. In his young adult years, Khrenov attended Saint Petersburg State Electrotechnical University (ETU) where he received his education in electric welding, engineering and mathematics.

Khrenov taught and researched at ETU until the 1925, but he longed for more ways to apply his research. More than anything, Khrenov wanted to find a way to weld underwater for quicker vessel repairs. WWI had ended, but WWII was beginning to brew and the USSR was mobilizing their fleets.

As Khrenov discovered, one of the largest hurdles to successful wet welds lie in the sporadic outflow of gas bubbles from the point of contact with the arc and metal. This reaction caused major porosity in the welds, and the bubbles burst out, untamed. With the help of others, Khrenov devised a waterproof coating for the electrodes and stable power source. Newly equipped, he began experimenting.

In 1932 after successful experimentation in the labs, Khrenov traveled with engineers to the Black Sea for further testing. Anticipation and excitement overtook them all as the electrode flashed lighting blue under the waves. Would it work? Would the electrode provide enough stability to shield the arc?

It did. After a successful testing, underwater welding was born.

The first underwater welds left much to be desired, of course, but scientists recorded the results in two historic articles:

Just several years after Khrenov’s successful wet weld, the Soviets began to use the technology for their vessels, harbors and docks. With the onset of WWII, many metals were in short supply and nothing could be wasted. In 1936, crews performed underwater welding as part of the effort to lift an enormous ship called Boris out of the Black Sea.

With success under the water, Khrenov didn’t stop there. He devoted most of his life research to welding, and he

Khrenov also found ways to enhance gas-pressure welding, plasma-arc cutting and cold welding. Beyond his research and new welding technology developments, he also taught at three other universities besides ETU.

With a master’s degree from LeHigh University, Jensen went on to earn his civil engineering degree from Minnesota in 1931. Shortly thereafter, Jensen started teaching at LeHigh. However with the US brought into WWII, he received a leave of absence in 1942 and traveled to the Annapolis naval engineering experiment station for welding research.

Expanding Underwater Welding to the Navy

For the years that followed in the war, Jensen served in the Navy and conducted the operations for their underwater welding and cutting program. Some of his most notable underwater construction includes salvaging several of the sunken ships in Pearl Harbor.

After WWII ended, Jensen went back to LeHigh to teach. He served as the president of the American Welding Society for the LeHigh Valley chapter.

Before the Big Leagues: Life as a Tender