What is Robotic Welding, and How Does It Work? 2021 Guide 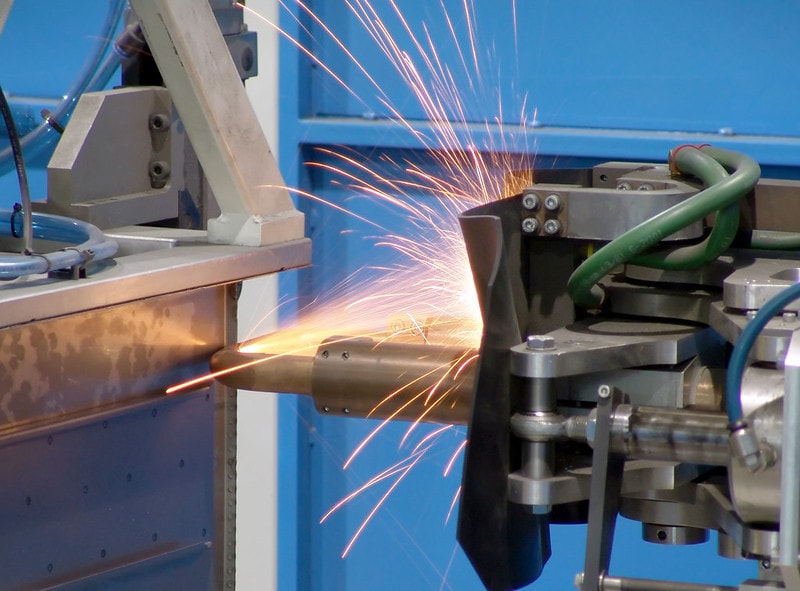 One of the things that welding is known for is the level of skill that it takes to do it. It is often touted as a great career for young people to enter. “Get trained as a welder! You’ll make good money.” While there is a good deal of truth in this statement, the fact of the matter is that welding has never been more difficult. Never have we had so many regulations and codes governing the industries in which welders work. But at the same time, these same industries have had to rise to the occasion and innovate. One of these innovations is the usage of robotic welders. These can be programmed with a computer to perform just as well or better than a human since the margin of human error is removed.

How Does It Work?

Most robotic welding processes use MIG welding. The wire can be flux-cored, solid wire, or metal-cored. This is the ideal process for welding robotically since the wire will keep feeding through the contact tip. Stick welding, for example, would not be a good option since the electrode rod is often only in the ballpark of 14 inches. This would defeat the purpose of robotic welding, which is to have continuous, uninterrupted weld without human interference. Additionally, most MIG welders in fabrication settings have a 100% duty cycle. This means that it can run constantly without needing to take a rest. In all actuality, you will have times where it is not running because you need to adjust the machine.

There are different types of robotic welding, but most facilitate automation through the use of CNC technology (computer numerical control). Firstly, the parts to be welded will need to have some kind of jig or fixture to hold them in place. Once they are fit in place, the programming can begin. The operator will use the pendant to adjust the articulating head of the robot. Each movement of the weld needs to be programmed into the pendant. The software is based on computer numerical control (CNC). This means that when each step is recorded, the coordinates of the position of the robotic welding head will be remembered. The operator will build a whole sequence of these movements to create a program for a certain weldment.

What are the Different Types of Robotic Welding?

What is described above is the automated MIG welding process as applied robotically. This is the most well-known in the arena of arc welding. However, other welding processes are automated but don’t necessarily use an electrical arc. 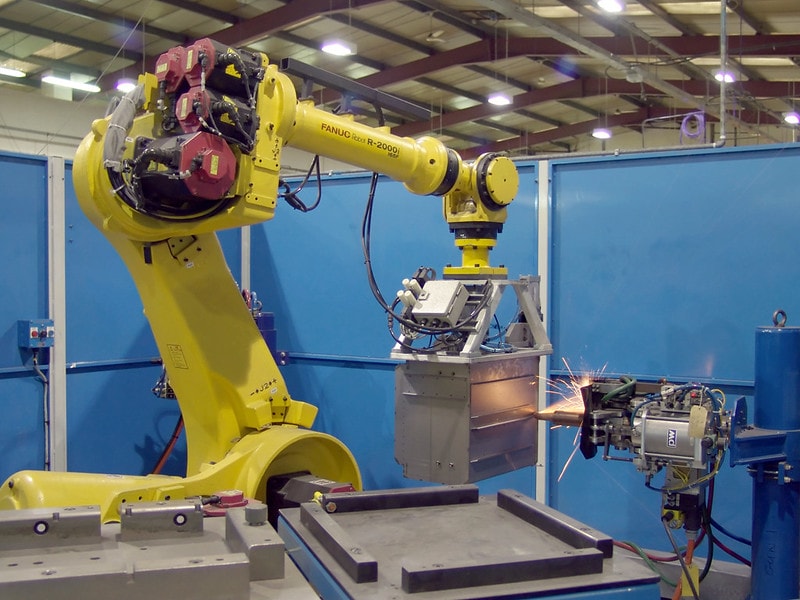 This process uses two different welding heads on either side of two pieces of metal. No electrical arc is struck on the base material. Instead, the current ‘feeds back’ creating excessive resistance, friction, and consequently heat. This will cause the surfaces between the two pieces of metal to fuse, creating what is known as a ‘weld nugget.’ This process is assisted using robotic automation.

Laser Beam Welding or LBW is an extremely precise process that utilizes either a continuous or a pulse laser beam to create strong and discreet welds. Since it is precise, the heat-affected zone does not get very large during welding. This means that the metal is less prone to distortion than even TIG welding, for example. Sometimes this process is combined with MIG welding to add more filler metal to the joint. LBW can be used to joint metals or thermoplastics.

This functions much like laser beam welding but is an arc welding process. It conducts an arc between a pointed tungsten electrode to the surface of the workpiece and the plasma is forced through a copper welding tip. Typically, no filler metal is added. The arc temperature averages around 50,000°F, whereas arc welding has temperatures around 10,000°F.

Where Is It Used?

Robotic welding can be used in any industry that would benefit from automation. Generally speaking, it would be more work than it is worth to program the welding sequence for one weldment. However, there are cases where automation, since it can produce near-perfect welds, will be necessary due to certain quality expectations. Here are some examples of where robotic welding is used.

Railcar manufacturers which produce units for the railroad industry often produce the same cars for months on end. Orders get placed for hundreds of units at a time. For example, bolsters, some of the most integral and complicated pieces for the ends of container cars, can be welded robotically. 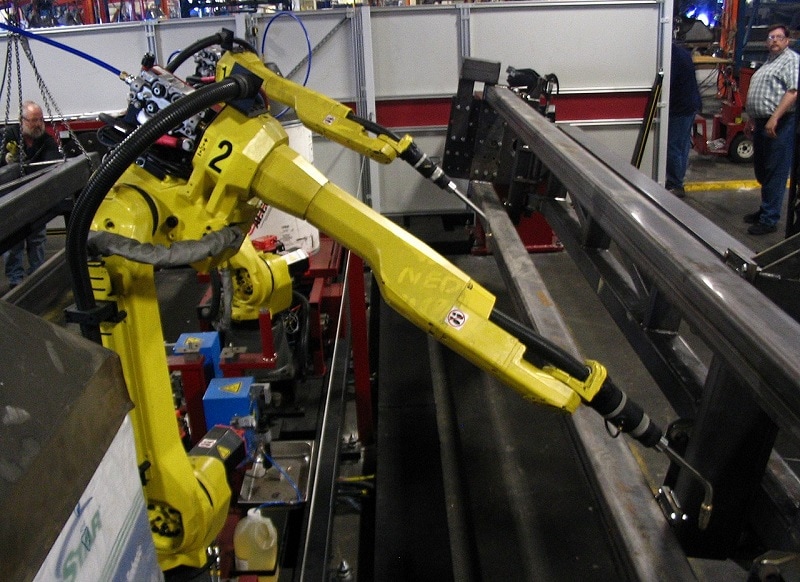 While many parts of a car are created from a brake press or a cast, it has to come together in a cohesive whole somehow. While metal fasteners or heavy-duty adhesives are used, welding is also critical especially for things like motors and pumps. Even more so than railcars, this process benefits from automation since there is more production in this industry.

Metal fabricators that take on various projects utilize robotic welding. These projects can range from marine equipment to scissor lifts. Even though we have just said that a one-off weldment will not usually be an ideal candidate for the robotic welder, a one-off project might be. This is because projects are composed of many different weldments. If you have to weld 250 I-beams for example, you might save time by making a jig and programming the robot. 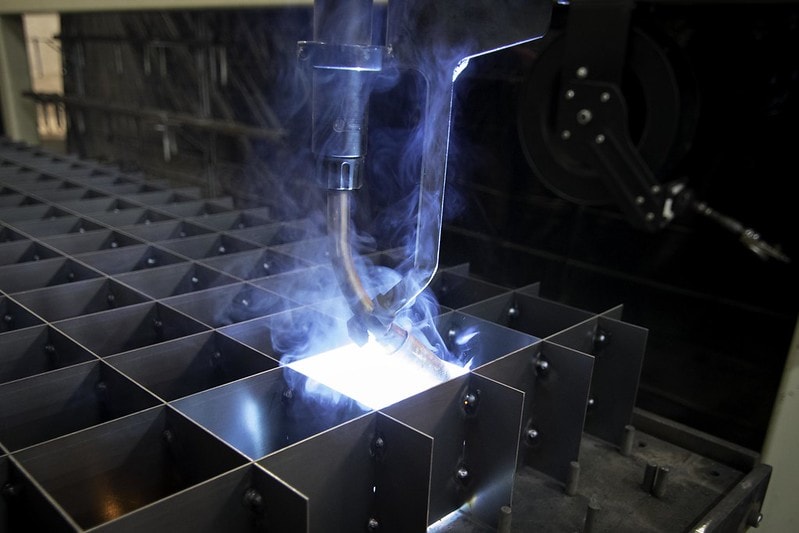 This has got to be one of the most asked questions. In a day and age where artificial intelligence is developing rapidly, many people are worried that they are not going to have a job if robotic welding becomes the default method of welding. Fortunately, the technology is still relatively in the infancy stage. There are a lot of problems with it. For starters, it all depends upon human input to automate it. We haven’t come to ‘I Am Legend’ yet. If we ever do get to that point, artificial intelligence will nonetheless be ‘artificial.’

How Much Does a Robotic Welder Cost?

A robotic welder with all of its other equipment can be priced in the six-figure range. Very pricey, we know. However, the company that is wanting to utilize this equipment will have to decide if this is a worthy investment, in the long run, potentially saving them millions.

How Much Does It Cost to Maintain a Robot?

In the day-to-day, this means replacing nozzle tips and keeping all of your leads clear. These are the minimal costs. However, if something is seriously wrong, like a faulty pendant or broken lead, this may require an electrical engineer who specializes in this specific robot to visit the job site. These visits can be pricey, and you may have to repair some expensive equipment to boot.

Even though many people have concerns over the possibility of getting kicked out of their job by this innovative technology, it does make the lives of many workers easier. Things that can be difficult and even annoying to weld are made easier by automation. The programming is likely to be more user-friendly in the future as well.

What is Friction Welding? Understanding it Thoroughly

What is Welding Wire, and What Types Are There? 2021 Guide